The solutions in the project I'm working on are quite big and can easily take up 30 to 90 seconds to build, even though we have rather fast laptops. This is probably because of some build-plugins we are forced to use and the tight SharePoint integration of those plugins. Nevertheless, it's quite annoying to see Visual Studio ‘hang’ every time you build your solution.

Last week I had some time on my hands to do some research on how we could improve these long builds. Turns out you can call MSBuild directly and let your solution compile outside of the Visual Studio instance. The build will still take up about the same amount of time, but it's less annoying as you can still do some work in Visual Studio.

I've used Scott Hanselman's blogpost to create some new External Tools in Visual Studio, placed them in my Menu and created keyboard shortcuts for them.

The External Tool ‘Solution (MSBuild)’ is configured like so:

For both ‘tools’ I've set ‘Use Output Window’ to true.

What you are doing here is telling to do use 3 cores (/m:3), build the projects in parallel (/p:BuildInParallel=true (default)), use minimal logging (/v:m), ignore warnings (/p:WarningLevel=0) and use the debug configuration (/p:Configuration=Debug).

You can also add keyboard shortcuts to the options, this can be done in the screen below. 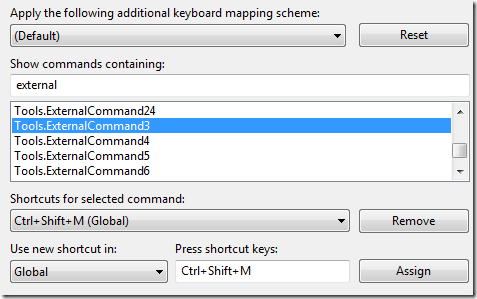 As Scott already mentions in his post, errors aren't listed in the Error List of Visual Studio, but in the Output Window. If you've got a lot of errors, this can be quite annoying.

One other gotcha is the post-build step which is configured in some projects. We've got several projects which have post-build steps doing stuff, like aspnet_merge to merge all the usercontrols in the dll's. This didn't work anymore.

Apparently, this option, When the build updates the project output, doesn't work properly with MSBuild:

You have to set it to _On successful build_in order to run the post-build steps.

There are also some other Visual Studio performance tuning tips, James Lewis has summed some of them up in a blogpost.